Combining musical performance with literary discussion, our Singers & Songwriters series takes visitors to the intersection of music, poetry, prose, lyrics, and beyond. This series started in September 2018 and has been presented in conjunction with our special exhibit Bob Dylan: Electric, which examines the literary aspects of Dylan’s songwriting and his enduring legacy on American music and literature.

This series has been wildly popular, with sold out shows to see talented artists speak. Singers & Songwriters continues with three events in April and May. Opera librettist Gene Scheer joins us April 24 to discuss how he helped transform Herman Melville’s magnum opus Moby-Dick into a critically acclaimed opera, which will be performed at the Chicago Opera Theater later in April. Then, on May 9, Native American hip-hop and spoken word artists Frank Waln and Tanaya Winder stop by to perform songs, discuss healing through their work, and creating spaces for indigenous voices in art. And finally, we welcome multi-platinum selling artist Joan Osborne on May 18 to share insights into songwriting and her latest release Songs of Bob Dylan, in which she covers a number of Dylan hits with her signature soulful voice.

Take a look back at the artists we’ve hosted so far who have graciously shared songwriting tips, strategies, influences, inspirations and more. These events are experiences that go beyond a typical live show, and allow fans to meet their favorite artists and ask them questions in an intimate setting.

We kicked things off with rapper, singer, writer, and all-around badass Dessa in September. She had just published her debut collection of essays, My Own Devices, in which she chronicles her life as a touring musician with deeply personal and insightful writing and her characteristic humor that keeps readers engaged. Dessa’s live event here was more of the same. We truly couldn’t have asked for a better start to this series, as she commanded a standing-room only audience and made us laugh and smile throughout. In the clip below, Dessa fields a question from an off-screen audience member and describes her different approaches to writing prose and writing song lyrics. 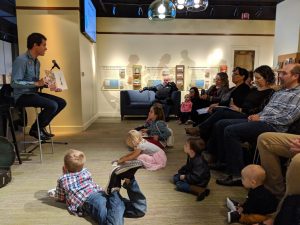 A couple weeks after that, we welcomed Ketch Secor, lead singer and songwriter of Old Crow Medicine Show, who also wrote a book, except this one was for children. So we invited families! Secor read his book aloud to kids and their parents and even played a few songs for us, including “Wagon Wheel,” on which he collaborated with Bob Dylan.

Here Secor talks about such collaborative forces inherent in American songs and the role they play in his songwriting process.

On the first day of December, Grammy-nominated musician Robbie Fulks came armed with an acoustic guitar and an impressive knowledge of American songwriters throughout history. He shared some of those songwriters who have influenced him, including Bob Dylan, and the ways in which he has emulated them. Fulks also shared some of his writing practices and processes, including a profound moment in which he responded to an audience member’s question about the fundamental nature of songwriting:

Fulks also played a number of songs, both originals and covers. In the following clip, he covers “You’re No Good,” the first track on Bob Dylan’s debut album Bob Dylan, which is itself a cover of Jesse Fuller’s song of the same name.

Then one week later, Louie Pérez, of Los Lobos, stopped by to talk songwriting and his new book of poems, lyrics, and artwork Good Morning, Aztlán. He told stories of growing up in East Los Angeles, embracing his Mexican-American identity, and using personal experiences to write universal songs that people can connect to.

“There was a couple ways I could have gone as a songwriter. I could’ve gone this way and the band could’ve been a good-time-great-to-dance-to kind of band. Or I could go the other way where I was writing songs about things that really mean something to me and hopefully would mean something someone else. So that’s the direction I took.”

Pérez also delved into the particulars of his writing process with bandmate and writing partner David Hidalgo, including finding inspiration for songs in otherwise mundane interactions of daily life.

Singers & Songwriters continues in April and May with these upcoming programs. Click the link for more information and to purchase tickets.