Skip to content
For today’s Typewriter Tuesday we are honoring Veterans Day and taking a look at this Smith Premier No. 4 that belonged to William French Hoxey, a veteran of World War I, donated to us by his daughter Margie. 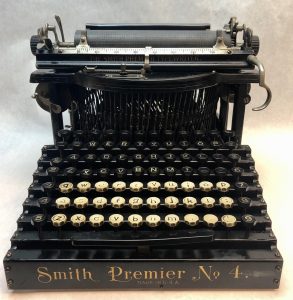 This quite remarkable machine dates between 1896 and 1904, more exact dating of the machine proved difficult due to wear around the serial number. Right away you will notice the double keyboards; the white for lowercase, and the black for uppercase. Internally, cleverly tucked away, there is a wooden wheel with brushes on it that one would turn with a crank to keep the typeface clean. There are a surprising number of wooden pieces throughout the typewriter, so while it is mostly steel that appears solid as a tank, there are more delicate workings that it could not function without. Each character has its own typebar arm, and strangely enough they come from underneath to hit the bottom of the platen and imprint on the paper. One would have to type out a dozen lines in order to read their first words written. In a design attempt to mitigate that issue, there is a swing-arm whereby the typist can flip the entire carriage forward, but it is easy to understand why ‘visible’ typewriters quickly dominated the market. As our Tools of the Trade exhibit shows, typewriters allowed more readability and more writers were able to distribute readily publishable pieces. It was also very democratizing for ordinary people to have the power of a printing press at their disposal. This Smith Premier No. 4 was owned by a poet from Michigan who was able to get many of his poems published in the newspapers. But well before that the owner, William French Hoxey, was a Private in the U.S. Army. He enlisted when he was nineteen and was sent to France to fight in two of the most important battles that the Americans were involved in during World War I. The St. Mihiel offensive was the first major independent action by the U.S. military and it took place during a driving September rain storm that made roads nearly impassable with knee-deep mud. The U.S. forces fired a million shells in the first four hours of the drive alone. This video from the National Archives is a good primer for the action and outcome and also serves as an insight to the times (by the way, film has no sound). Private Hoxey served as an engineer and was tasked with keeping roads and bridges passable for troops, trucks and horse-drawn wagons. Engineers also dug trenches and built protective structures, as well as maintained all the communications channels. Creating lines of barbed wire was also one of their duties, as was crawling up to the frontline and cutting a gap in the wire coils and marking it for the troops to rush through when the whistles blew for the charge. After the St. Mihiel battle, the U.S. troops marched on to take their place for the Meuse-Argonne offensive, which was the largest and deadliest in American history. It occupied the entire Western Front and continued up until the Armistice on November 11, 1918. This video uses archival footage but also has modern dramatizations so it is more easily understood by our CGI addled imaginations (plus, it has sound.) The battle lasted 47 days and there were over 350,000 casualties. William Hoxey was honorably discharged in the spring of 1919 and went back to Michigan and got a job at the Post Office. He also began writing letters to a sweetheart in Louisville and after a year and a half and many, many letters she moved to Michigan and married him in 1921. Bill and Ethel Hoxey had six children in the years after the war, the second-born contracted polio, but all the children survived. Bill used his typewriter to write poems about his family, being home, and about what he had witnessed in the war. Sadly, in 1932 Bill was diagnosed with ‘shell-shock’ and sent to live in a VA hospital. Ethel was forced to make money and take care of the children, who at that point ranged in age from 10 to 3 years old, all by herself and during the Great Depression.  Bill saw his family once a week, but then he was transferred to another hospital, so Ethel moved the six kids and started again to make a home. Then five years into his hospitalization Bill was moved to a hospital in a neighboring state and Ethel and the children could not afford to follow. Private Hoxey went from seeing his family once a week, to once a year, to not at all, but it is thanks to his youngest, Margie, that we can check out his typewriter and and get to know the person behind the veteran. Although the Allies won the war, the sacrifices made by the soldiers were enormous, and when multiplied by the sacrifices of their spouses and families, incalculable. One of Bill’s other daughters followed in his footsteps as a writer and summarized her feelings this way: “When he died in 1972 I was handed a paper bag with his numbered clothes in it and an American flag… but I do have something more of my father than what was in that bag. I have the poems he wrote…” William French Hoxey was a poet and a soldier and we honor his service as we do all veterans that defend America and our democracy. We also honor their families and the sacrifices that they endure in support of their loved ones. Care for our veterans has improved since Private Hoxey’s day, but admittedly we could still do better for our vets. They deserve our best effort, because what makes America great is our constant striving to be better. The following are two poems Hoxey had published, “Our Flag” on the left and “To the Employer” on the right. As you can see in “To the Employer,” Bill was always striving to produce the best that he could, much like the country he fought for, as evident in this published piece he saw fit for further edits even after it was published.

This typewriter and more are on display at our “Story of the Day” desk. This specific typewriter isn’t available for use, but we have many other vintage, fully-functional typewriters for you to use. So come on down and getting typing!