Each week, the My America blog series will introduce you to one of the writers featured in our new exhibit My America: Immigrant and Refugee Writers Today, opening November 21, 2019. The exhibit is designed to elicit thoughtful dialogue on a wide array of issues with contemporary immigrant and refugee writers delving into questions about writing influences, being multilingual, community, family, duality, otherness and what it means to be American. Check back every Wednesday to learn more about these writers and their thoughts on these themes, as we highlight select quotes from the exhibit as well as reading recommendations. Today, meet Gustavo Arellano, a features writer for the Los Angeles Times, former investigative reporter and editor for OC Weekly, and award-winning writer of the column “¡Ask A Mexican!”

A native of Anaheim, California, Gustavo Arellano is proud to be Mexican. “I always tell people I grew up Mexican. I grew up a Mexican in Anaheim, like literally in a Mexican village in Anaheim. And that showed me there’s no reason to be ashamed to be Mexican, because a lot of people of my generation, they didn’t have that comfort.” Arellano’s family comes from the Mexican state Zacatecas, where his grandparents first met. Many people from his family’s village relocated to Anaheim, bringing with them their specific customs and mores, resulting in an authentic Mexican community, which impacted his development as a writer. “Growing up in a community where you’re related to hundreds of people, and know a good thousand, and you all have the same connection back to the small little village in Mexico—what it taught me in terms of writing is knowing who you are and drawing strength from that, but also realizing that here’s this whole village and no one outside of that village knew what was going on.” 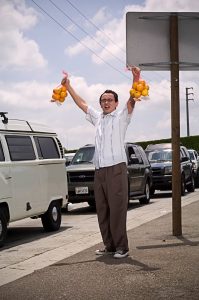 This desire to share stories with the world that would otherwise go unnoticed has led Arellano to become a self-described “chronicler of the hidden histories of Orange County and Southern California.” And while he does write a lot about his family, culture and upbringing, he’s made it a point throughout his career to write about a wide range of topics so as not to be pigeonholed. The one overarching theme in Arellano’s writing, however, is perhaps that sense that stories and voices deserve to be heard. “I’m a writer because I love to tell stories that are untold…I just think it’s important to try to excavate those things and people that deserve attention.” Read on to learn more about Arellano and his writing, and be sure to visit My America in person for even more when it opens November 21.

“When I started my first job at OC Weekly I was a token everyone. I wasn’t just a token Latino. I was a token African American writer, I was a token Vietnamese writer, because I was the only person of color. And also I was the only person who even cared about those other communities…But I always figured if you’re gonna tokenize me, well, I’m not gonna let you do that. I’m gonna tokenize myself on my own terms and be able to dictate what I feel comfortable with, what I’m gonna mock, and what I refuse to do. And that worked for me.”

“To me being an American is being able to define my patriotism and my beliefs whatever way I want and not have to adhere to anyone’s other notion of what an American is supposed to do, be, act or feel like…That’s totalitarianism. Totalitarianism is what the revolutionaries tried to break away from, and tried to create something where anyone could be anything, where a Mexican can turn into an American, and where an American can feel Mexican. I know it sounds very maudlin, and, frankly, at this point, a little bit antiquated, but I don’t care. That’s my America to me.” 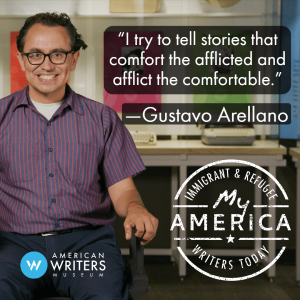 “I think we should push more to keep our identities throughout everything, because despite all the different languages that I speak, it’s still the same person who’s writing all of them.”

On Pushing Toward Progress

“I do believe in America. I do believe in what it represents. America gave my family an amazing home and an amazing life. America isn’t perfect. Not even close at all. But I think a good American will always criticize the sins, especially the original sins, of this country. And not just criticize, but try to push it into that better place…And as long as I’m able to live and write I’m gonna be trying to push people to believe in the America that I see. Whether we’ll get to that, I don’t know, but that doesn’t mean I’m gonna stop. I’m always gonna push.” 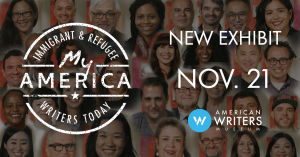