The list of prominent American authors of Gothic vampire fiction is a long one. Anne Rice, Scott Snyder, and Stephenie Meyer to name a few. So, when it came time for the American Writers Museum’s Chicago Council to choose a theme for its annual soiree on October 19th to benefit the Museum’s educational initiatives, the choice was an easy one.

Every year the Museum’s auxiliary board, the Chicago Council, throws a themed bash at the Museum entitled Next Chapter. And every year the Chicago Council is tasked with finding a theme to the event to keep this from being yet another stuffy charity function where you make an appearance and watch the clock until you can make your escape. Last year it was Next Chapter: The Great Gatsby and the outfits were outstanding, the mood celebratory, the atmosphere decadent and, most importantly, we raised almost $30,000 to fund the Museum’s Write In program for underprivileged children.

But the Chicago Council is set on topping that figure this year, so the atmosphere and decadence must be topped too! But how? In our planning sessions, we sifted through a litany of ideas, with some eventual gravitation toward a spooky Halloween theme. But ghosts and goblins so close to Halloween just didn’t feel right. Then we started to have visions of Tom Cruise and Brad Pitt in Interview with a Vampire and broadened the thought to Anne Rice’s entire Vampire Chronicles body of work. From there Next Chapter: The Vampire’s Ball was born.

The Chicago Council is comprised of attorneys, consultants and other leaders from the Chicago business community, and we have come together in a big way to make this year’s Next Chapter soiree the best one yet. We’ve meticulously planned delicious food, refreshing drinks, tasteful decorations and music—all of the Gothic variety—to increase the support from our generous sponsors, both old and new. Embrace your inner vampire with us and help us bring Chicago students to the Museum for free!

The Next Chapter: The Vampire’s Ball event will take place at the American Writers Museum in downtown Chicago on Saturday, October 19th from 7:30-10:30 p.m. If you haven’t yet been to the Museum, this is your chance for a grand introduction to all its exhibits in a festive atmosphere. If you have been to the Museum, we invite you to come to experience it in a whole new light and make some new friends (not sunlight, of course, you’re a vampire after all!).

You can find more details about the event and purchase tickets or sponsorships at The Vampire’s Ball. So, break out your best Gothic attire and plaster on some fake fangs and we’ll see you at the Museum on October 19th! 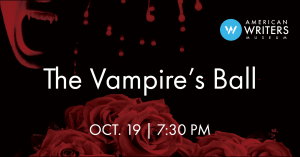 LEARN MORE AND GET TICKETS HERE