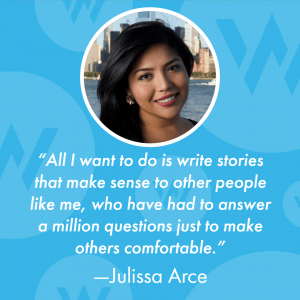 Julissa Arce is one of the writers featured in our exhibit My America: Immigrant and Refugee Writers Today and is a leading voice in the fight for social justice, immigrant rights and education equality. She is also the bestselling author of two memoirs, My (Underground) American Dream and the YA version Someone Like Me. Arce will visited the American Writers Museum January 23, 2020 to speak with Chicago Public School students during the day, followed by a public evening program for all ages. Watch a recording of the public event here.

The following piece was written by Arce and was previously published by the School Library Journal.

Imagine if each time someone asked you a simple question your answer elicited 10 more questions.

Where are you from? Texas.
But where are you really from? What’s your ethnicity? Mexican. I was born in Mexico.

You hope this is the end of the questioning.

How old were you when you came to live in the U.S.? Eleven.
Your English is so good, did you always know how to speak it? No.
So, where is your family now? My mom lives in Mexico.

You really hope they don’t ask about your dad. He’s passed away and you don’t feel like talking about it today.

When did she move to Mexico? When I graduated high school.
Why?

You pretend not to hear the question. The answer is very complicated. She had an accident and your family couldn’t afford medical care in the U.S. And since you were undocumented, you weren’t eligible for financial aid, and all the money from your funnel cake stand went to pay for college.

Does she come visit you? No, she can’t. Her visa keeps getting denied.
Why? It’s a long, complicated story.

You make an excuse to leave the conversation.

I’ve been answering these questions my whole life, long before the 2016 election. When you are a Mexican, an immigrant, and formerly undocumented, you have to explain so much of your life for it to make sense to other people. You cannot just say you are from Texas; you must explain when, how, and why you came here. I am tired of explaining.

As a writer, I am constantly asked to make my stories more relevant, but relevant to whom? To make them less angry, but it’s not anger that is etched on my words, it is truth. To make them more appealing to a larger audience. But all I want to do is write stories that make sense to other people like me, who have had to answer a million questions just to make others comfortable.

I read a story recently about Georgia Clark, a teacher in Texas who was fired after sending a series of tweets to the sitting U.S. President, one of which read, “I really do need a contact here in Fort Worth who should be actively investigating and removing the illegals that are in the public school system.” Eighteen years ago, I was one of those “illegals” at a public high school in Texas. I felt like an outsider—not because my teachers were threatening to deport me, but because I couldn’t tell anyone I was undocumented, and I had never read any books that spoke about my experience.

I am less interested in writing with Georgia Clark as my audience and more concerned with using my stories to make sure her students feel seen, loved, and understood. I might never be able to change Georgia Clark’s mind on why she is wrong about her students, many of whom are actually U.S. citizens, born in America with brown skin. But I can keep writing stories that are relevant and digestible for her students. Stories that make sense to them. Books that tell these young people, who may be undocumented, or have parents who are undocumented, or who are American-born Latinos, or who are people of color, that they don’t have to shrink themselves to keep others at ease.

“My hope is that my stories will help [Latinx students] take up space in their classrooms, neighborhoods, and in this country. At least in the pages of my books, they will not have to explain; they can simply exist.”

There are other writers who will write books about why Trump got elected and why rural white voters feel disenfranchised. I’ll read some of those books and learn. But those aren’t the ones I want to write. I don’t want to explain to young readers why their teacher voted for Trump despite teaching in a predominantly Latino neighborhood. I want to write about heroes that look like them, speak like them, and triumph despite every possible challenge they face. My hope is that my stories will help them take up space in their classrooms, neighborhoods, and in this country. At least in the pages of my books, they will not have to explain; they can simply exist.

Julissa Arce is one of the 31 writers featured in our exhibit My America: Immigrant and Refugee Writers Today. She is the author of Someone Like Me: How One Undocumented Girl Fought for Her American Dream (Little, Brown) and a CNBC and Crooked media contributor, writer, speaker, and social justice advocate. She is the co-founder and chairman of the Ascend Educational Fund, a college scholarship and mentorship program that assists immigrant students, regardless of their immigration status, ethnicity, or national origin. Julissa is also a board member for the National Immigration Law Center and for College Spring. Prior to becoming an advocate, she built a successful career on Wall Street, working at Goldman Sachs and Merrill Lynch.