Each week, the My America blog series will introduce you to one of the writers featured in our new exhibit My America: Immigrant and Refugee Writers Today, opening November 21, 2019. The exhibit is designed to elicit thoughtful dialogue on a wide array of issues with contemporary immigrant and refugee writers delving into questions about writing influences, being multilingual, community, family, duality, otherness and what it means to be American. Check back every Wednesday to learn more about these writers and their thoughts on these themes, as we highlight select quotes from the exhibit as well as reading recommendations. Today, we’ll focus on Julissa Arce, a contributor for CNBC, a bestselling writer, and a staunch advocate for social justice. 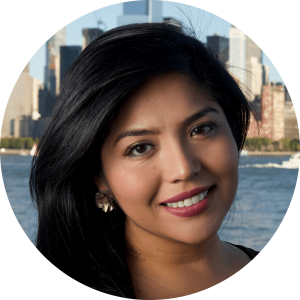 When asked to describe an object that is meaningful to her as an immigrant, Julissa Arce went a different route. For her, it is the absence of an object, specifically a family photo with her entire family. “I have searched in my mom’s house back in Mexico, I have searched in my sister’s house in San Antonio for a picture of my mom, my dad, my two sisters, my younger brother and myself, and that picture doesn’t exist—and it says a lot to me about why it doesn’t exist. We’ve never, all of us, lived in the same place at the same time. We’ve always been separated by the border.” Arce moved from Mexico to San Antonio when she was 11 years old and at the age of 14 her visa expired. She only found out her visa had expired when she asked her parents about going back to Mexico for her quinceañera, something she always wanted after seeing her sisters’ parties, but they said it wasn’t an option. Arce turned to writing during this time, keeping a journal to express her thoughts and feelings. “It was the only place where I could really be honest because I was undocumented when I was young here in the U.S. and I could never really tell anyone the reason why I did certain things. But in my journal I could be very honest with myself about why I was feeling a certain way or why I was doing things a certain way.” Twenty years later, in 2014—after rising to prominence as a Wall Street executive while undocumented—Arce officially became a U.S. citizen and now advocates tirelessly for social justice, immigration rights, and education equality. She co-founded the Ascend Educational Fund, a college scholarship and mentorship program for immigrant students in New York City, regardless of their ethnicity, national original or immigration status. She has written two memoirs, one for adults and one geared toward young readers so they may envision a happy ending to their immigration stories like hers. “I don’t want young people now to feel like their experiences don’t matter, like they’re not important.” Julissa Arce will read her work and discuss her story here at the American Writers Museum on January 23, 2020. Learn more and RSVP here.

On Representation in Literature

“When I was growing up in Texas I never read a book that was written by a Latina or a Mexican, or that talked about undocumented people. And that experience made me feel really lonely…Later on in my life I discovered Sandra Cisneros, and Reyna Grande, and Erica Sánchez, and they are not only writers that I admire, they’ve become friends and they’ve become mentors, and they continue to inspire me so much…And hopefully we’re showing young Latinas that they too can be writers, and that their stories are important.” 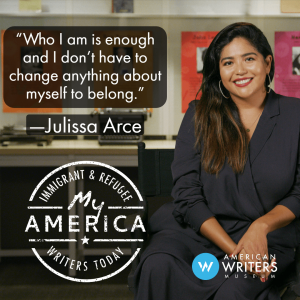 On Trying to Belong

“Recently I’ve really been thinking a lot about the damage that [assimilating] does to people of color, the damage that it did to me, because I always felt like in order to belong I had to be something else. I had to speak English better, I had to stop listening to Spanish music or I had to lose weight, I had to have lighter skin or lighter hair. And now I sort of have tried to take all of that back and have tried to piece myself back together so that I know that who I am is enough and that I don’t have to change anything about myself to belong.”

“In some ways my mom and my dad felt like strangers to me because I didn’t grow up with them. From the time I was three to the time I was eleven I lived in Mexico and they lived in the U.S., and they came to visit me every once in a while. But I didn’t live with them. So this idea of family is something that I’ve had to redefine over and over again, about what it means to be family…Family is much more than just your DNA.” 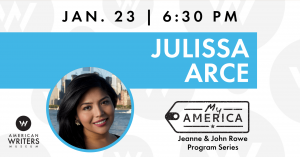