From Chicago to Dublin and back, I have seen the likes of two nations’ writers museums, and, as they would say in Ireland, it was craic (crack)— “the serious work of play.”

The idea for the American Writers Museum (AWM) spawned from the influence of The Dublin Writers Museum. The two museums are unacquainted cousins from across the pond. Malcolm O’Hagan is the forethinking founder of the AWM that opened in Chicago in May 2017. An Irishman born the day before St. Patrick’s Day, O’Hagan toured The Dublin Writers Museum and then wondered why America did not have a museum dedicated to celebrating its writers. That experience launched O’Hagan on a seven-year journey to create the AWM, the only museum of its kind in the United States.

My first trip to Ireland was scheduled last June as a chaperone with my son’s high school concert choir, which was touring the country to perform in cathedrals, including St. Patrick’s Cathedral in Dublin. During an AWM preview day for the press and bloggers, O’Hagan had suggested I visit The Dublin Writers Museum and recommended the exhibit, Yeats: The Life and Works of William Butler Yeats at the National Library of Ireland. 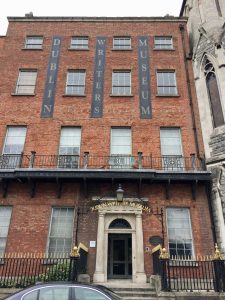 The Dublin Writers Museum opened in 1991 in a former home at 18 Parnell Square originally owned by Lord Farnham who lived there in the late 1700s. The Dublin Writers Museum is “old world.” Display cases are filled with books, manuscripts, photographs, and artifacts highlighting Ireland’s famous authors. Visitors read descriptions and stories on panels or listen to a hand-held audio device. By contrast, the AWM is very much “new world,” filled with innovative, dynamic and interactive digital exhibits.

The Dublin Writers Museum is located in what was once a grand home with ornamental columns and a gilded frieze, but it is rather dark and stiff. (Perhaps it is filled with the energy of Irish writers’ downtrodden angst—after all, Ireland has been through a lot.) Writers such as Jonathan Swift, Oscar Wilde, Bernard Shaw, William Butler Yeats, and Kate O’Brien are featured. On display are a first edition of Bram Stocker’s Dracula, Samuel Beckett’s specially designed telephone, and the piano of James Joyce. The Irish Writers Center is located next door.

Conversely, the AWM is a light-filled modern space on Michigan Avenue (perhaps filled with the energy of American writers’ naïve optimism). The AWM celebrates all types of writing from advertising copywriting and journalism to novels and biographies. The place is hands-on and fun—full of craic! 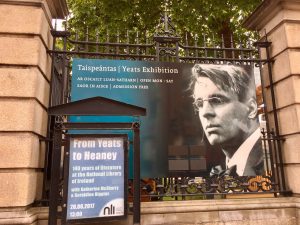 Heeding O’Hagan’s suggestion, I toured the Yeats exhibit at the National Library of Ireland. William Butler Yeats carried an unrequited, thus painful, love for Maud Gonne, and she was the ever-present muse for his poems. Yeats was a central figure in the Irish literary revival, and Gonne was a political activist, ardently involved in the struggle for Irish Independence.

The National Library of Ireland preserves the largest collection of Yeats Manuscripts in the world. Yeats was a Celtic mystic. He said, “I believe in the practice and philosophy of what we have agreed to call magic …” In a letter to John O’Leary, Yeats wrote, “The mystical life is the centre of all that I do and all that I think and all that I write.” Yeats was instrumental in establishing the Irish National Theatre Society (INTS). Gonne, also a mystic, was active in the society, as well. 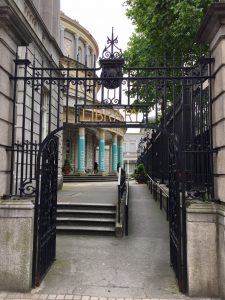 The exhibition brochure tells us that Yeats “revered the book.” He collaborated with other artists to achieve his vision of a book of poetry: Text, paper, type, colour, illustration and binding design combined to craft a singular work of art in which all elements were balanced. The Tower is considered to be his ultimate achievement and his most influential volume of verse. Learn more at the Yeats online exhibition.

Writers are influenced by their sense of place. The Dublin Writers Museum and the American Writers Museum are shaped by that same sense. In Writing Down the Bones, Natalie Goldberg discusses “going home” as writers: “So go home. Not so you can boast, ‘My uncle was a colonel in World War II,’ but so you can penetrate quietly and clearly into your own people and from that begin to understand all people and their struggles.”

It was nice to visit the emerald Isle, learn about Irish authors, and compare writers museums yet, I returned to America ready to be home, claim who I am, and write—my most “serious work of play.” 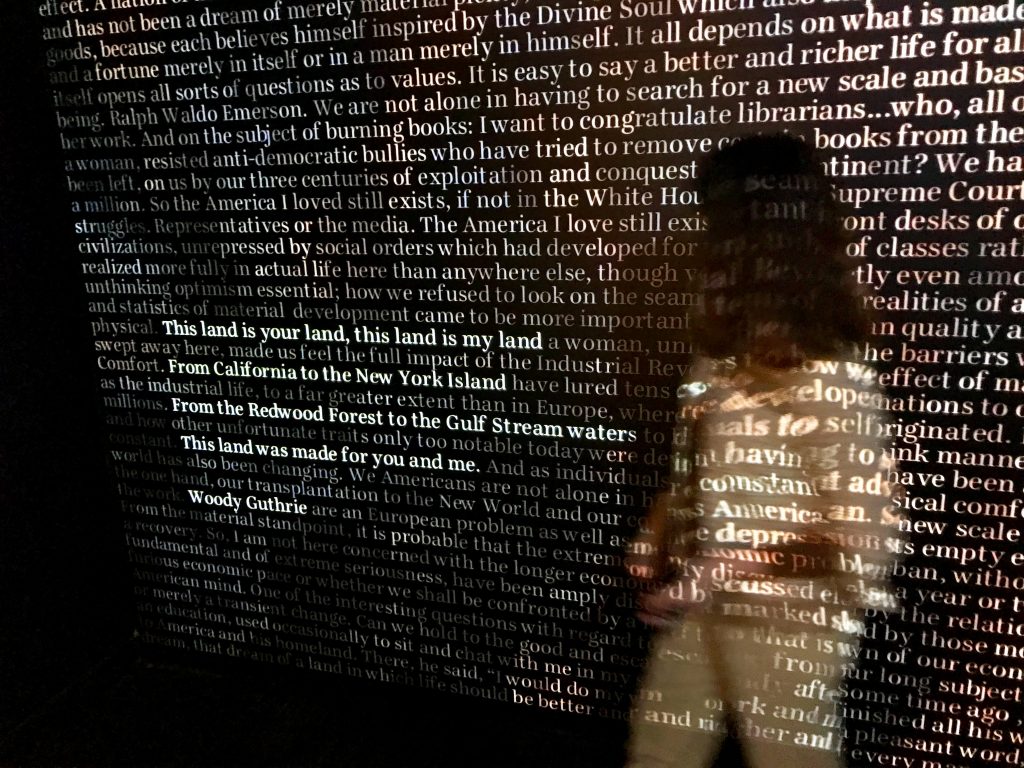