With her usual wit and humor the writer Erma Bombeck wrote, “It’s frightening to wake up one morning and discover that while you were asleep you went out of style.” Erma may have predicted her future.   I went to the local used book store hoping to find at least one of her twelve books, nine of which once appeared on the New York Time’s best seller list, and the clerk told me they had none. She said people never requested Erma’s books anymore.

That’s a shame. Thankfully the local public library still carried books by this woman writer who, with humor and wit, portrayed the reality of suburban motherhood and marriage during the 1960s and 70s. With titles like If Life is a Bowl of Cherries What Am I Doing in the Pits and The Grass is Always Greener Over the Septic Tank, Erma had no time for pretense.  Her self-effacing humor endeared her to countless readers.

“A friend never defends a husband who gets his wife an electric skillet for her birthday,” wrote Erma likely causing women throughout America to applaud with agreement. In Erma’s early years of marriage, women were supposed to be thrilled to wax a floor shiny clean or scrub an oven before whipping up a four-course meal to serve her family. Erma wrote not just about the stresses of life as a mother and wife, but she also wrote about the need for more than a clean kitchen sink to make a woman feel self-fulfilled.  The word perfect did not exist in Erma’s vocabulary. Children were often messy, husbands could be clueless and neighbors annoying, but she wrote about each with such heart that the reader knew Erma’s humor was never meant to hurt or be mean-spirited. 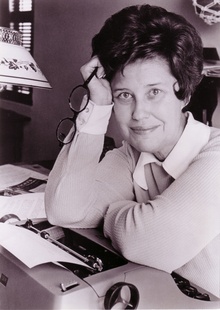 Erma was more my mother’s era, but I recall reading her books as a teenager because the titles made me smile. Who can’t laugh at books titled: Motherhood: The Second Oldest Profession or When You Look Like Your Passport Photo, It’s Time to Go Home.”

Erma made me understand my mother’s life better, including her own struggles to balance housework, a job, and a husband, as a middle-class, Chicago suburban housewife. Alas, I’d forgotten about Erma myself.  Then, a few weeks ago, I was on a historic home tour in central Phoenix and one of the homes, a most eclectic and colorful home, had dozens of photos of Erma on a hallway wall. I did a double take. I recognized the author from her book jackets.

The home was owned by Erma’s son, Andy, one of her three children, one girl and two boys, whose escapades were fodder for her books. The Bombeck family had lived in the Arizona for many years after leaving Ohio where Erma was born, earned a journalism degree, and began her newspaper career.

There was Erma smiling in family photos, just like any other wife or mother. Perhaps younger visitors to the home, even when told her name, would never imagine that this woman with the bouffant hair-do and wide smile in the black and white photo had a regular spot on the national television show Good Morning America, wrote a syndicated newspaper column for 31 years, and fought hard for the passage of the Equal Rights Amendment. But I knew. I felt as if I had forgotten a dear friend and here was my reminder.

Erma wrote, “Life has a way of accelerating as we get older. The days get shorter, and the list of promises to ourselves gets longer. We live on a spare diet of promises we make to ourselves when all the conditions are perfect.”

Perhaps Erma was thinking of her own mortality as she wrote that column. Though her life seemed transparent, for many years she kept hidden the fact that since her 20s she had suffered from kidney disease. She revealed her medical condition only when she had a kidney transplant later in life and became an advocate for the National Kidney Foundation.  It was complications from the transplant that contributed to her death when she was 69.

I happened to be at a thrift store the other day and I came across a hardback Erma Bombeck book, a compilation of her essays. I paused to read an inscription on the first page. 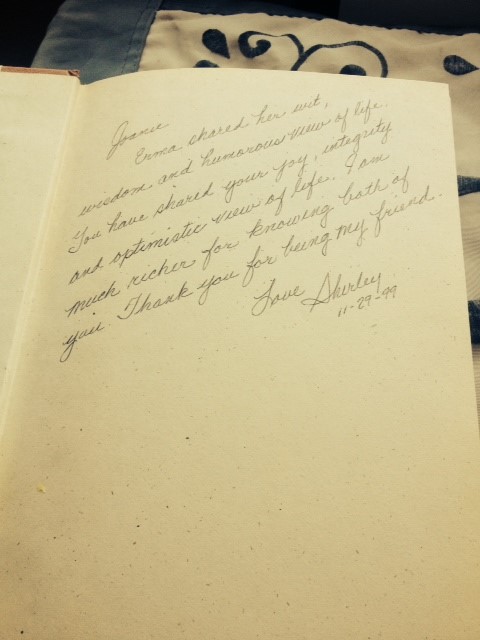 Erma shared her wit, wisdom and humorous view of life. You have shared your joy, integrity, and optimistic view of life. I am much richer for knowing both of you. Thank you for being my friend. Love, Shirley 11-29-99

“Success,” wrote Erma, “it outliving your failures.”  Even though Erma’s books are harder to find in book stores, she is not a failure. Her writing brought comfort and understanding to her readers and no woman who can do that is a failure. I found myself wishing she were still alive and I could thank her for writing her truth in a way that brought happiness to so many. I guess I just did.

Registration for the Erma Bombeck Writing Workshop begins today, December 5, 2017. Get your submissions to the competition in by January 3, 2018.The Workshop takes place in Dayton, Ohio on April 5-7, 2018. Visit the website for more information.