Annalee Newitz is a journalist, editor, podcast host, and author of both fiction and nonfiction…so it is safe to say managing time is crucial to them. Time plays a major role in their new novel, The Future of Another Timeline, specifically time travel and history revision. In the novel, two lives from different eras cross. There is Beth, a seventeen-year-old riot grrl from 1992, and Tess, a geoscientist from 2022 who travels time and edits history to improve the lives of women throughout time. This is a story of time travel, murder, and the lengths we’ll go to protect the ones we love. It is also, according to author Michelle Tea, the “mind-blowing punk feminist sci-fi time traveling thriller you’ve been waiting for, and which our culture desperately needs.”

Newitz will visit the AWM on Tuesday, October 8 at 6:30 pm to read and discuss The Future of Another Timeline, as well as take questions and sign books. We spoke with them ahead of the event about the book, their writing process, and if time travel was accessible today who from the past they would like to meet. Read on to learn more and be sure to RSVP to our event here.

AMERICAN WRITERS MUSEUM: How would you characterize your new book, The Future of Another Timeline? What should a reader expect when they pick it up?

ANNALEE NEWITZ: It’s a story about Tess, who is part of a secret group of time traveling feminists — they’re trying to change history so that women have more rights. It’s also about a teenage riot grrl named Beth, who is stuck in the Southern California suburbs in 1992, dealing with an abusive father and a best friend who has decided to murder rapists for justice. Tess and Beth’s paths start to cross, and the book is about what their relationship is, and why Tess has an urgent message for Beth. Meanwhile, an edit war over the timeline is brewing, and it may prevent anyone from changing history again.

AWM: What are the general themes of your book?

NEWITZ: If I were picking hashtags for the book, I would choose: #timetravel #sciencefiction #geology #history #chicagoworldsfair #wormholes #feminism #intersectional #harriettubman #bellydancing #riotgrrl

AWM: Time travel is a key component of The Future of Another Timeline — how much scientific research went into it? 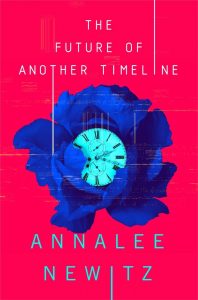 NEWITZ: This novel is my love letter to discovery science, which applies to fields like biology and physics, where there are phenomena out there in the world — like the human body, or time itself — that we are learning about as we use them. Discovery science is where a lot of the wonder is, because we’re often faced with things we don’t understand yet and all we can do is try our best to apply scientific principles to them. In my novel, the time machines are part of discovery science — they’ve been around millions of years, and humans have been trying to figure them out since the dawn of recorded history. It’s sort of like how medicine and astronomy have these early origins in magic, and now we think of them as science. We see a lot of the characters using the Machines but also shrugging a lot and saying, “Welp, we just don’t know why this works, but hey let’s use it to travel half a billion years backwards in time!” Discovery scientists are part-adventurers, part-philosophers, and I really enjoyed presenting my heroes with an inexplicable phenomenon and letting them go to town.

AWM: You write both fiction and non-fiction, as well as co-host a podcast — do you have different approaches to writing based on the format or genre? If so, how do they differ? How are they alike?

NEWITZ: After working for over a decade as a science journalist, fiction felt very liberating. I got to make things up instead of trying to get at the exact truth. I also think fiction tells truths that nonfiction can’t, especially about how human biases and hopes play into supposedly rational scientific projects. But after a while, I missed the feeling you get in journalism when you can say to a reader, “Can you believe that this amazing thing is ACTUALLY REAL? Here’s another cool thing we discovered!” I love being able to move back and forth between the two kinds of truth telling.

AWM: Speaking of time travel, if you could meet one American writer of the past who would it be and why?

NEWITZ: I would have loved to hang out with Ann Bannon when she was writing her Beebo Brinker books about tawdry lesbian romances in the 1950s. Her best-known titles were Women in the Shadows, Odd Girl Out, and Beebo Brinker. Bannon was a housewife from the Midwest who went to New York City to “study” the subjects of her fiction, and wound up writing these incredibly nuanced, realistic, heartfelt stories of how hard it was to be gay in the mid-century. They were sold as cheap, sensationalist paperbacks at drugstores, but they got into the hands of a lot of lonely gay people in the 50s and 60s. Suddenly, these dime paperbacks opened up a world with other gay people who were having as much fun (and drama) as any soap opera star.

“Keep writing, even if you think it’s awful. You can fix it in revisions. Revision is magic!”

AWM: What was your favorite book to read as a kid?

NEWITZ: I was a huge fan of Lawrence Yep’s novels, like Child of the Owl and Sweetwater. I also mainlined every single Ruth Chew book I could get my hands on, because she really knew how to create magical worlds. And of course, I loved Ursula Le Guin’s Earthsea books and Daniel Pinkwater’s nutso YA novels like Lizard Music and Alan Mendelsohn, the Boy from Mars.

NEWITZ: Tade Thompson’s Insurrection, the sequel to his amazing novel Rosewater, about what happens when an alien technology/ecosystem/unexplained blob lands outside the crowded cyberpunk city of Lagos, Nigeria. JY Yang’s amazing Tensorate series, about the politics of technology and magic, set in a world of Asian myths. And Chicago author Mary Anne Mohanraj’s collection The Stars Change, which is a set of linked stories about a terrorist bombing on another planet, and how the people of one city come together and save each other with the help of sexy aliens and sensible aunties who know you have to eat some dinner before you start the revolution.

NEWITZ: Keep writing, even if you think it’s awful. You can fix it in revisions. Revision is magic! Every author feels terrible about the first draft, and nobody gets it right the first time.

AWM: Is there anything else you’d like to add? Any projects you are currently working on you’d like us to spread the word about?

NEWITZ: I’m the co-host, with author Charlie Jane Anders, of the podcast Our Opinions Are Correct. It’s a fortnightly show about the social meaning of science fiction, and it just won a Hugo Award! We tackle a wide range of topics in science and science fiction, often with amazing guests. 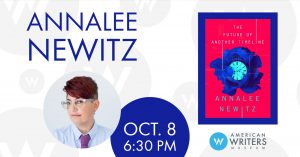 Annalee Newitz presents their exciting new novel on October 8 right here at the American Writers Museum. They will be joined by Dan Sinker, journalist, professor, creator of Punk Planet magazine, and the Rahm Emanuel parody Twitter account that made all of Chicago laugh out loud. Incidentally, Sinker has called The Future of Another Timeline, “The best punk rock / time travel / Chicago history / riot girl / mindf*ck of a book I have ever read.”