On July 17, 2019 we welcomed Marine veteran and accomplished writer Elliot Ackerman at the American Writers Museum. Ackerman served five tours of duty in Iraq and Afghanistan, where he received the Silver Star, the Bronze Star for Valor, and the Purple Heart. Following that, he has gone on to have a stellar writing career, writing both fiction and nonfiction and covering the conflicts in the Middle East as a journalist. His 2017 novel Dark at the Crossing was a National Book Award Finalist.

Ackerman’s new memoir Places and Names is available now and is, according to Booklist Online, “perhaps the finest writing about the Afghanistan and Iraq conflicts that has been published to date.” Combining his recent experiences as a journalist and his past experiences in combat, Ackerman paints a vivid portrait of war and the toll it takes on human lives. Places and Names is both an intensely personal book about the terrible lure of combat, as well as a brilliant meditation on the larger meaning of the past two decades of strife for America, the region and the world. We spoke with Ackerman via email about this book, his approach to writing, and what he’s currently reading. Read on to learn more.

Elliot Ackerman: I work as both a novelist and a journalist. Often times, my journalism serves as the first draft or themes that I will come to address in my novels. Many of the themes that appear in Places and Names also appear in my novels, such as Dark at the Crossing. Unlike my novels, I didn’t know that I was writing a book as I was writing many of the pieces which feature in Places and Names. It was only later, when I began to understand how all the journalistic dispatches I was writing from places like Syria, Iraq, and Turkey fit together did I begin to understand that they were, in fact, a book.

AWM: Places and Names moves back and forth between your recent experiences as a journalist in Syria and your deeper past in combat in Iraq and Afghanistan — in what ways do these different parts of your life intersect? Are there any parallels between the two? 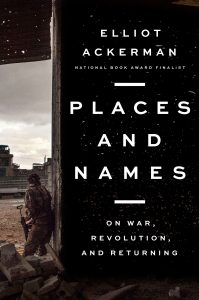 ACKERMAN: When covering the Arab Spring Wars, particularly in Syria, I kept encountering these echoes of the American experience from a decade before in the Middle East. Specifically, our wars in Iraq and Afghanistan had defined me and as I covered the war in Syria and the rise of the Islamic State I became close with Syrian activists and in one case a former-member of al-Qaeda in Iraq. I began to understand that just as the turmoil in the region had defined me it had also defined them. Despite our superficial differences—where we were from, our nationalities—there was this profound commonality that existed between us, a commonality of experience. I wanted to explore that in my writing and thematically it is at the core of Places and Names.

AWM: What inspires you to write?

ACKERMAN: I’m an optimist by nature. Humanity has this nasty tendency to focus on our differences when it is our similarities that define us. So why do I write? I guess I write for the same reason people have always made art, which is to connect. Art works by a process of what I would term “emotional transference.” How many times have you gone to a movie and cried, or visited a museum and felt overwhelmed by a piece of art. When I’m writing, if it’s going well, I am feeling something as I put the story on the page. And if you, the reader, open one of my books and feel some fraction of what I felt as I wrote the story that is “emotional transference.” I’ve caused you to feel what I felt despite the fact we’ve never met, despite our differences. This act is an assertion of our shared humanity. And in these days, it’s an inherently optimistic act.

ACKERMAN: None. It’s not because I’m not curious but because I worry that meeting a writer or artist whose work I admire would in some way diminish my ability to appreciate their work. It isn’t fashionable to hold this opinion these days, but I don’t believe an artist’s work should be judged by what type of a person they are. Though it is, of course, nice when you learn that an artist you admire is also (at least by all reports) a generous, lovely person.

AWM: What was your favorite book to read growing up?

ACKERMAN: I had many favorite books growing up. One favorite was The Boy’s King Arthur by Thomas Mallory, but specifically an edition illustrated by N.C. Wyeth, who also illustrated iconic editions of Treasure Island. His illustrations, combined with the text, really grabs a hold of your imagination, particularly when you’re about eleven years old. “It befell in the day of Uther Pendragon, when he was king of all England, and so reigned, that there was a mighty duke in Cornwall that held war against him a long time …” To this day, that opening line gives me chills.

ACKERMAN: Machines Like Me by Ian McEwan, A Separation by Katie Kitamura, Our Man by George Packer. My New Year’s resolution was to listen to all 152 hours of Shelby Foote’s The Civil War: A Narrative. It’s currently the spring of 1864 and I’ve got about thirty hours left.