June Hur was born in South Korea and raised in Canada, moving back to Korea during high school. Upon graduation, Hur went back to Canada and studied History and Literature at the University of Toronto, two interests that combine in her much anticipated debut novel The Silence of Bones, which was recently selected the American Booksellers Association as one of the top debuts of Winter/Spring 2020, and was also honored as a Junior Library Guild Selection.

Most of Hur’s work is inspired by her journey through life as an individual, a dreamer, and a Christian, with all its confusions, doubts, absurdities and magnificence. She began writing The Silence of Bones after obsessing over books about Joseon Dynasty Korea (early 1800s). We spoke to Hur via email about her debut novel, the immigrant experience, and the power of writing to “examine woes.”

Read our Q&A below, and then register for our free and live webinar with Hur here this Wednesday, April 29 at 6:30 p.m. CDT. This program is made possible by Jeanne M. and John W. Rowe and is presented in conjunction with our special exhibit My America: Immigrant and Refugee Writers Today, which can now be explored virtually at My-America.org.

American Writers Museum: Can you briefly describe The Silence of the Bones? 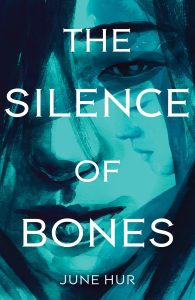 June Hur: 1800, Joseon (Korea). Indentured to the police bureau, sixteen-year-old Seol has been tasked with assisting a well-respected young inspector with the investigation into the politically charged murder of a noblewoman. As they delve deeper into the dead woman’s secrets, Seol forms an unlikely bond of friendship with the inspector. But her loyalty is tested when he becomes the prime suspect, and Seol may be the only one capable of discovering what truly happened on the night of the murder. But in a land where silence and obedience are valued above all else, curiosity can be deadly.

AWM: What should readers expect to feel when they read it?

HUR: My hope is that readers will feel fascinated by the complexity, depth and grandeur of Joseon Dynasty Korea. I also hope that those who are homesick and lonely like my heroine, Seol, will feel less alone.

AWM: You were born in South Korea and raised in Canada…did exposure to these different cultures and languages impact your writing? If so, how?

HUR: I grew up using the Korean language with my parents, but the years I spent living and studying in Korea allowed me to become more fluent, and this definitely impacted my writing. I was able to use my ability to read and understand Korean to research for my debut. Of course, there are academic English resources on Joseon Korea, but when it came to very niche information (like details about damos, female police officers), I had to look into Korean resources to provide my imagination with enough facts to get it rolling!

“As an immigrant, I grew up feeling like I was different from the majority of my classmates…All I wanted was to blend in but no matter how hard I tried to repress my Korean-ness, it kept surfacing.”

But besides the research, there is the lived experience as a Korean-Canadian that heavily influenced my writing. My parents raised me with traditional Korean values, and some of these values were shaped by the Confucian beliefs and practices that dominated Joseon Korea. This personal connection to history allowed me to create a heroine who was genuine to her time and culture, and to write about a world that felt familiar and home-like to me.

Then there’s the other side of me. Raised in Canada, I’ve been exposed to the public discourse on issues related to gender equality and colonization, especially through my university education. These discourses ended up becoming the lens through which I interpreted Korean history, and it’s the reason why I gravitated toward certain aspects of Korea’s past, namely gender segregation and the tension between closed-door Korea and the West. In the end, being a Korean-born and Canadian-raised writer proved to be a very unique and rewarding experience!

AWM: One of the major themes of our special exhibit My America: Immigrant and Refugee Writers Today is the notion of “otherness,” or being made to feel like an outsider…have you experienced feeling like this in your life? If so, has it impacted your writing?

HUR: As an immigrant, I grew up feeling like I was different from the majority of my classmates. I grew up during a time when Korean culture wasn’t considered “cool,” when my friends didn’t even know where Korea was. Being Korean was therefore a source of embarrassment for me. All I wanted was to blend in, yet I failed to do so, because no matter how hard I tried to repress my Korean-ness, it kept surfacing, especially during lunch time. Gimbap, japchae, Kimchi, and the likes. My mom would lovingly pack these Korean meals early in the morning before rushing off to work. But after being made fun of several times for my food, I started dumping my lunch into the garbage, or I’d try to eat it super quickly with the lid raised so no one could see (or hopefully smell) what I’d brought.

A combination of these and other experiences made me feel like a lone island existing in-between two cultures, two countries; I felt like I didn’t belong to either place. This impacted my writing in that I ended up only being able to relate to marginalized characters. So for more than ten years, I’ve always written about the marginalized, the people who were always searching for ways to belong, and searching for a ‘home’ in an unwelcoming society.

“Writing about Korea has now turned into my act of reclaiming my roots, and finding a place of belonging through storytelling.”

It wasn’t until recently, while writing my debut, that I became more aware and accepting of my Korean identity. Reading about Korea left me deeply surprised to find that so much of who I am is rooted in Korea’s past. The more I researched about the past, the more I learned about myself and I realized that I’m not as disconnected from Korea as I imagined myself to be. Writing about Korea has now turned into my act of reclaiming my roots, and finding a place of belonging through storytelling.

AWM: Why did you want to become a writer?

HUR: At first, I wanted to become a writer because writing was so fun! I loved how immersive writing was, sweeping me away from my mundane life and allowing me to escape into a world brimming with romance and peril. But as I grew older, my reason for wanting to write books changed, and I think it had something to do with the grief of living without my parents. I only see them once every two years, as they live in Korea. I began wanting to write books to “examine woes” (as my writing friend Maria put it), in the hope that my writing might become a companion to readers who are also grieving in different yet similar ways.

“Once in a while, look away from your work and look around at the vastness of life. Be kind to yourself and strive for a balanced lifestyle.”

AWM: Who are your major influences as a writer?

HUR: Jane Austen sparked my love of writing and C.S. Lewis made me want to become a better writer.

HUR: Flannery O’Connor. In one of my English literature classes, we were learning about O’Connor’s work, and my professor shared that Flannery O’Connor considered herself a Catholic first and a novelist second. Yet as a writer she was the other way around; she didn’t allow her faith to limit her art. As a person of faith myself (a Christian), and as someone who doesn’t write Christian books, I’ve always wanted to chat with O’Connor about the topic of faith and creativity, and how to balance both.

AWM: What are you reading now? Who should we be reading?

HUR: In adult literary, I’m currently reading Kate Elizabeth Russell’s My Dark Vanessa. In Young adult fiction, I’m reading the advance reader copy of Janella Angeles’ Where Dreams Descend. And what I’d recommend everyone to read? Celeste Ng’s Little Fires Everywhere! It’s been months since I read this book, and it still haunts me.

HUR: For the ambitious people out there: if you find that your ambition is bringing you pain more than joy, then once in a while, look away from your work and look around at the vastness of life. Be kind to yourself and strive for a balanced lifestyle. Don’t be ashamed that your journey seems to be taking longer than others. In the meanwhile, find other things outside of your ambition to look forward to, other things in life that will bring joy and a sense of purpose.

June Hur will read from and discuss her debut novel The Silence of Bones with the American Writers Museum April 29 at 6:30 pm CDT via a free live webinar hosted on Zoom. Click here for more details and to register.