Each week, the My America blog series introduces you to one of the writers featured in our newest exhibit My America: Immigrant and Refugee Writers Today. The exhibit is designed to elicit thoughtful dialogue on a wide array of issues with contemporary immigrant and refugee writers delving into questions about writing influences, being multilingual, community, family, duality, otherness and what it means to be American. Check back every week to learn more about these writers and their thoughts on these themes, as we highlight select quotes from the exhibit as well as reading recommendations. Poet, novelist and fellow Chicagoan Erika L. Sánchez is our featured writer this week, as the play adaptation of her young adult novel I Am Not Your Perfect Mexican Daughter opens at Steppenwolf Theatre.

When Erika L. Sánchez was in graduate school, she had a professor who basically told her she wasn’t smart enough for his class. “To me it felt very racial, I just didn’t think that he would talk to a white student the way that he spoke to me.” At the time, it was really jarring for her, being underestimated because of who she is and where she comes from. But now, Sánchez finds it almost funny and revels in the success she has achieved in spite of such treatment. “I get to live the way that I want. I get to produce the work that I want and people recognize my work. I feel validated in that way, it feels very powerful. But for so long there were many people who doubted my abilities.”

And did she ever prove those doubters wrong. Today, Sánchez is an acclaimed poet, novelist, essayist and professor at DePaul University where she teaches writing and Latinx literature. Her debut poetry collection, Lessons on Expulsion (July 2017), was a finalist for the PEN America Open Book Award and her debut young adult novel, I Am Not Your Perfect Mexican Daughter (October 2017), is a New York Times Bestseller and National Book Award finalist. Steppenwolf Theatre Company is performing an adaptation of I Am Not Your Perfect Mexican Daughter that is set to run through April 4, 2020.

The daughter of undocumented Mexican immigrants, Sánchez grew up in the Mexican working class town of Cicero, Illinois, just outside of Chicago. Her parents came to the United States in 1978 by hiring a coyote, crossing through the Tijuana desert, and riding in the trunk of a Cadillac to bypass Border Patrol. “There was just a lot of danger lurking.” And while this traumatic experience is not Sánchez’s specifically, in some ways it is because, as she says, “We often inherit trauma from our parents or from generations, consciously or unconsciously…and the way I’ve dealt with that trauma is by writing about it…it’s something that I think about a lot: how can I transform some of that suffering, some of that trauma into art, into healing?”

We were honored to interview Sánchez for our special exhibit My America: Immigrant and Refugee Writers Today, in which she expands on these themes and more, sharing her experiences as the daughter of immigrants and how that upbringing has shaped her life and work. Read some excerpts from the interviews below, and explore the exhibit in person to hear directly from Sánchez and other talented writers. Plan your visit today!

“I love to read and I grew up fairly poor and I spent a lot of time by myself. One of the ways I looked for solace was through books. And so I lost myself in these worlds and I became really enchanted by these far-flung places and I wanted to see the world and I wanted to write stories.”

“I feel very blessed to be bilingual. I grew up with two very different languages at my disposal, which made my life much more rich and interesting. And having access to such a vast vocabulary has been so instrumental as a writer. I can draw upon so much. And I feel like both languages are beautiful in their own way…Spanish is such an important part of how I see the world and how I process everything, essentially, that it’s hard to separate that from anything else. For me, both English and Spanish are just intertwined.”

“[An American] is someone who lives here and belongs here, in whatever that capacity means for that person. I don’t think there’s just one definition of being an American. We all have different ways that we manifest that identity. But for me, I realize that as a citizen I do have a world of privileges that other people don’t. But I don’t think that is a requirement to be American.”

On Humor as Survival

“The way Mexicans tell stories, the way they find humor in the most difficult circumstances…I think that has shaped me greatly. And also reveling in absurdity. I think that’s something we are able to do because in my opinion oppressed people are the funniest and I think that’s because it’s a form of resilience to find the comedic value of really terrible situations. It’s a form of survival, for sure. And that’s one of the reasons I wanted to tell stories.” 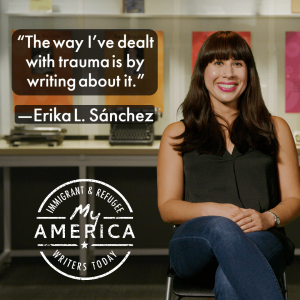 “For me solitude is really essential to writing…the concept of having a room of one’s own—which is from Virginia Woolf—that idea that women need their own space in order to thrive, to think, to wonder, to ponder, etc. Growing up I didn’t have that sort of privacy. I had to fight for it. That was really difficult because my parents were very traditional, old school Mexicans, and they didn’t believe that girls should be so solitary, that I should be wandering out in the world by myself. That was not acceptable. As a grown woman now, I cherish that solitude so much…I feel that now that I have that space, a room of my own, I can do whatever I want.”

I Am Not Your Perfect Mexican Daughter

One thought on “My America: Erika L. Sánchez”