Each week, the My America blog series introduces you to one of the writers featured in our newest exhibit My America: Immigrant and Refugee Writers Today. The exhibit is designed to elicit thoughtful dialogue on a wide array of issues with contemporary immigrant and refugee writers delving into questions about writing influences, being multilingual, community, family, duality, otherness and what it means to be American. Check back every week to learn more about these writers and their thoughts on these themes, as we highlight select quotes from the exhibit as well as reading recommendations. Today, it is our honor to introduce American Book Award winner and National Book Award finalist Laila Lalami.

Laila Lalami became an immigrant to the United States by chance. Born and raised in Rabat, Morocco, she came to the U.S. to do a PhD in Linguistics at the University of Southern California. Her plan was to finish her courses, return to Morocco, write her dissertation, then become a college professor. “And then within about a year of actually being in school I met someone and then we fell in love and…[laughs]…and then we got married.”

Today, Lalami is a naturalized citizen of the United States and an accomplished writer, a fact she credits to growing up in a house full of books. Both of Lalami’s parents were avid readers and they passed this along by encouraging her to read, frequenting used bookstores, and allowing her the freedom to choose whatever she wanted to read. “It was through this love of reading that I wanted to become a writer, the urge to tell stories came from that. So I started writing when I was nine. And it was really the only thing I’ve ever wanted to do.”

But Lalami didn’t do it professionally right away. When she began writing she wrote in French because it was the language in which she had first been exposed to literature, yet this proved problematic for her once she started to become aware of how she was framing her writing. “It’s difficult to describe it other than to say that it was a colonial gaze…and once you start noticing that sort of thing, where you’re looking at yourself from the outside because you’re using the other language—and not just any language, not just a random language, but the language of the former colonizing power, with all of the consequences of that—once I became aware of that, it became more difficult for me to continue writing in French. And so I sort of gave it up.”

It wasn’t until her late 20s when she was doing her PhD in Linguistics that Lalami became much more devoted to writing as a vocation. She found English to be a much better vehicle for her writing because it was not the colonizing language of her home, Morocco. Now, her books have won multiple awards and ended up on many bestseller lists while dealing with themes of home, outsiders, politics, culture and her own personal life. We interviewed Lalami for our special exhibit My America. Read some excerpts from this interview below, then explore the exhibit in person to hear and see Lalami expand on these topics and more. Plan your visit today!

On Being an Outsider

“The feeling of being an outsider, to be the person who’s kind of on the outside looking in, is not one that you have to be an immigrant to experience. You can experience it within your own society. I used to resent this particular position, but I have come to in fact appreciate it because it is what gives me the privileged position to be an observer. So I have spent my whole life observing. To be both on the inside and the outside, kind of shifting positions all the time, that’s a wonderful privilege to have and I certainly use it in my writing. I focus a lot on people who are like this, who are sort of caught in between. That’s what I’m interested in exploring.”

On Writing Influences and Representation 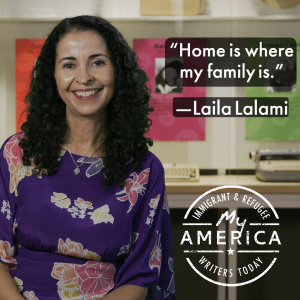 “The ones that were the earliest influences on me particularly were Moroccan writers like Driss Chraïbi and Mohamed Choukri, who were both publishing in the ‘80s when I was a teenager and I started for the first time reading books in which Moroccan characters were featured and centered into the story. That had the force of revelation for me because so much of what I had read up until then featured people from other cultures, particularly France, so it was only once I became a teenager and was reading adult literature that I really had access to a world of imagination that featured Morocco, Moroccan characters and Moroccan concerns.”

“For me home is where my family is, where my husband and my child are, but it’s not a simple location…I’ve lived in so many different places, so that’s why for me it’s more rooted in the people than it is in the place itself.”

On Language and Power

“Writing is intimately connected to language. You can’t write without access to language. And language is also connected to power—the ability to speak, the ability to narrate, the ability to sort of control the story, right? If you control the story, you control the world…So there is that power imbalance that goes into how a story is narrated, and there are instances in which the writing comes out in a sense to satisfy a foreign imagination about the country more than it is about telling what the country is really like. So in other words, it’s placing the subject, which is a Moroccan character or Moroccan encounter, in the context of how it might be read by a French reader. That’s what I mean about the writing having a colonial gaze.”

Hope and Other Dangerous Pursuits