Each week, the My America blog series introduces you to one of the writers featured in our newest exhibit My America: Immigrant and Refugee Writers Today. The exhibit is designed to elicit thoughtful dialogue on a wide array of issues with contemporary immigrant and refugee writers delving into questions about writing influences, being multilingual, community, family, duality, otherness and what it means to be American. Check back every week to learn more about these writers and their thoughts on these themes, as we highlight select quotes from the exhibit as well as reading recommendations. Read on to learn more about award-winning writer Yiyun Li, who has written six books, published numerous short stories and essays, and earned a 2010 MacArthur Foundation fellowship.

Yiyun Li came to the United States from China to become a scientist, an immunologist to be specific. She had finished college and mostly just wanted to leave China, “so science was an excuse because I was good at science.” She pursued her PhD at the University of Iowa, where she first considered being a writer. “I didn’t know anything about Iowa before I came. The only two things I knew there are a lot of pigs, and there are a lot of corn fields. But when I got to Iowa City I realized everybody in town was writing a novel. The doctor working above us, he was writing a novel. That’s when I realized it is possible for me also to become a writer.”

And become a writer she did. Li is the now the author of six books including three novels, two collections of short stories, and one essay collection. Her short stories and essays have been published in magazines like The New Yorker and The Paris Review among others, and her work has been recognized with many distinctions including a PEN/Hemingway Award and a MacArthur Foundation fellowship. Yet despite this recognition, Li came to writing as a way to feel invisible. “The writer’s relationship is with the book and the characters. And once the book is finished, this book or this set of characters go out to interact with the readers. And I think that interaction actually is what I mean. By writing them, I still remain invisible to the public.”

Today, Li teaches creative writing at Princeton University. We interviewed Li for our current special exhibit My America: Immigrant and Refugee Writers Today, where she expands on themes of belonging, community, Americanness and home. That notion of home is particularly important to Li, who is “like a snail,” as she puts it. “Everything is carried on my back.” When Li came to the U.S. twenty years ago she had all her possessions in two suitcases, which she then would’ve considered her entire home. And even now that her life has expanded it’s “still what’s around me, my house, what I’ve built around me. That’s home to me.”

Read excerpts from our interview with Li below, then explore the exhibit in person to hear and see Li expand on these topics and more in an interactive setting. Plan your visit today!

On Parenting and Writing

“I think two things as a parent. One is you want to do all you can for your children. Two is nothing much is in your control. And those two things also inform my writing as, yes, of course you want to do all you can for the book, but you always have to acknowledge that a lot of things are not in your control. You can make it as good as you can and that’s it. Writing a book is like giving birth to a child. You just have to send this child to the world and the child will have its own life.”

“I speak Chinese, but I write in English, which gives me an interesting angle. For instance, I feel that with English, which is not my native language, I don’t have that intimacy with the language. I did not grow up with it. So there are certain moments in writing that I feel that the language is not my friend. Whereas, say, Chinese can be my friend because I can express it…I don’t write in Chinese, but I imagine if I wrote in Chinese I would not have pressured the language as hard because it would be closer to me.”

On Writing and Science

“I learned one important thing from science: you can never say you know something. In science you can have a hypothesis, you can do your research, you can do your exploration. You can get a little closer, but you can never say you get the truth. And I carry that belief into writing, especially in writing fiction. I don’t believe a writer can say, ‘I know this character.’ You can only say, ‘I get a little closer to this character by writing about him or her.’ My philosophy is, you always start from the unknown and when you write you get to know a little bit better, just getting closer, but never there.”

On Self-Reflection in America

“To me the best thing about America or Americans is this ability to self-reflect and even laugh at yourself. Maybe we’re losing that now a little. But coming from China, I knew what it meant when a whole nation of people could not laugh at themselves. That is just terrible. So America always is special to me because people do laugh at themselves, and people recognize their follies. And that doesn’t mean they’re great. It only means they have this ability to self-reflect.” 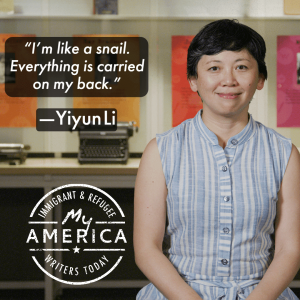 “It’s a chance encounter between me and these sets of characters. And when I decide to write these characters, my job is to explore what they know and what they don’t want me to know. Characters sometimes resist being known by the writers. That’s my experience from writing. And they put up a show, or they put up a face, or they deceive you in all sorts of ways. And again, it is the writer’s job to write past that resistance and to, what I call it, to eavesdrop on the characters’ hearts. You have to listen to their secrets and their stories and sooner or later something happens and you get to know them a little better.”

A Thousand Years of Good Prayers

Dear Friend, from My Life I Write to You in Your Life