Each week, the My America blog series introduces you to one of the writers featured in our special exhibit My America: Immigrant and Refugee Writers Today. The exhibit is designed to elicit thoughtful dialogue on a wide array of issues with contemporary immigrant and refugee writers delving into questions about writing influences, being multilingual, community, family, duality, otherness and what it means to be American. Check back every week to learn more about these writers and their thoughts on these themes, as we highlight select quotes from the exhibit as well as reading recommendations. Today it is our pleasure to introduce you to writer, professor, and fan of tiny felt frogs Juan Martinez.

Juan Martinez has lived in many places, but he’s always kept one thing with him: a little felt toy frog. From the sleepy town of Bucaramanga, Colombia where he was born to the Venezuelan jungle where he lived in a workers camp while his father engineered a dam and finally to various parts of the United States, this frog has stayed with him. The eyes fell off and freaked his son out, so now it has new googly eyes. But in a way, Martinez finds that this frog connects him to his own personal experiences (not the googly eyes part though). “One thing I noticed about that little, tiny frog that made this ridiculous journey back and forth between continents a couple times, was that it was actually made in the U.S….And so it’s back home, I guess.”

Martinez also now calls the U.S. home, Chicago specifically, becoming a U.S. citizen in 2016 mainly to be able to participate in the democratic process after being urged to do so by his mother, who Martinez, as a Colombian, says he is “contractually obligated to mention.” And though he has lived in the U.S. for some time, he’s weary about thinking of home as a fixed, geographical place due to the transient nature of his life. For him, home is more about people. “I have my son and I have my wife. We’re a family, and that’s what home is right now.”

Martinez has also found a “home” of sorts in the Chicago literary community. As he says, “We’re in a city of writers, a city of readers…I’m always struck by how many people are reading, and how many of those people are reading amazing stuff.” Martinez also teaches at Northwestern University where he is an Assistant Professor of English, his 2017 short story collection Best Worst American was well-received and his other writing has appeared in various literary journals and anthologies. In addition to all of this, Martinez, along with fellow My America writer Vu Tran, will be back here at the AWM on March 18 to speak with Embarc Chicago students about writing and finding their voices as part of our Write In Youth Education Program.

The following quotes were pulled from our interview with Martinez for our special exhibit My America: Immigrant and Refugee Writers Today. Read the excerpts below, and visit in person to hear and see even more from Martinez, plus many other talented writers.

“I would say that by a very wonderful—if accidental—combination of elements, this country has produced an incredibly rich, incredibly diverse stock of story. And it’s a stock of narrative that has many weird, rich and multivalenced strands…and so, one thing about what it means to be an American writer is that you are given access and privilege to one of the most wildly varied archives of story and narrative in the world. That’s really cool.”

On Becoming a Writer

“I started writing from a very early age, 5 or 6. And I want to say, especially if there’s anybody out there who’s into writing, there’s multiple avenues into storytelling. And even though I love to read—I was obsessed with reading—I was also obsessed with drawing, and so a lot of my stories started with drawings. Anybody who wants to be a writer, you should do what I think Anne Lamott says, is just fill up. And one of the ways you can fill up is with art. And I love books. I love comic books, I love movies. A lot of the stuff I absorbed as a kid has continued to be an enduring love.”

On the Spanish Language

“One thing that I find frustrating about Spanish is that it is not terribly direct. It loves to circle around an issue. It doesn’t seem to trust theses often, or statements of purpose. There’s something kind of wonderful and sometimes florid about it. There’s this love of the musicality of itself in some ways. And I think that comes out in my writing sometimes. I think it’s something that maybe drives me crazy, something that has been deeply internalized, but also something that I like, you know? Spanish likes to take its time.” 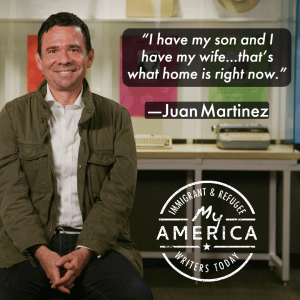 “If you go around, if you look at the world, none of us are exactly the same person from day to day, from week to week, from moment to moment. That’s something that bleeds into my fiction a little bit, in the way I treat character. But I also feel that’s a useful standard to carry around in life, that you’re not just one thing, but are comprised of a lot of seemingly contradictory impulses and seemingly irreconcilable ideas. A lot of what you can do as you go about living is being ok with the fact that everything is changing, that neither the world nor yourself are ever going to be in a fixed state, possibly ever. Just enjoy where you are and appreciate the weirdness and the miracle of just walking around.”

“One of the liberating tricks to writing fiction is to pretend you’re not the narrator…what you do is insert yourself into the mind of somebody else, partly by lending them aspects of yourself. Which is partly what fiction is for, right? To sort of recognize that common, bizarre empathy, that shared undercurrent of feeling and thought that we all have. There’s a part of me that believes, and a bigger part of me that hopes, that we’re all essentially the same weirdo that I am and some people are just better at keeping it under wraps.”

Links to other works.